I used Sleep as Android for two years and did a break of 2 years. Now I am back, and I am highly interested in the pulse oximeter measurement. As I can take out from the discussion here, there are probably two devices that are accurate and work well with Sleep as Android.

So for me, there is a massive difference in the pricing. So my question is:

At the end of the day, I am not sure if this will gain anything to my sleep? I am using a Polar H7 in combination with my smartphone and »sonar«. I am wondering if these oximeters are well in heart-rate measurement as well. I believe so

So any advice from your side?
Thanks Tobi

PS: I am located in Germany.

O2ring seems to be a very good device and seems to accurately tracks spo2 overnight, but it does not work with SAA (at the moment at least). Can’t comment on go2sleep but it does look promising.
Stresslocator is an ok product but it doesn’t record to its own storage (which is something I want). It doesn’t always track very well as it relies on a band that wraps around your finger using velcro, which is then attached to a watch device via mini usb. Lots of places that can detach during your sleep (and often do) unless you tape them up (usb conector and the finger band).

The cheaper spo2 measuring devices are only intended for soot checking oxygen levels. They aren’t designed for extended use and won’t really work overnight. They are definitely useful but just be aware of their intended use and what they cannot do.

An accurate hrm does appear to provide better sleep stage insights than without and the spo2 measurements help identify oxygen drops, which may correlate to sleep disturbances.

I use a sleep phaser light from happy electronics, which is similar to sonar in functionality but relies on IR, not sound.

Now just trying to decide if I should buy the go2sleep device.

Yes, they work independently and do not break each other.
You can track your sleep with Go2Sleep and next morning you will get SAA sleep report and Go2Sleep app report at the same time.

May I ask will movement tracking be supported soon?

Hey I stumbled upon this bored after downloading sleep as a trial. I’m undecided on full version from what I’m reading I cant use my wellue ring.
Samsung health randomly dropped polar h10 as an accessory which got me looking for other fitness apps… which got me to google fit where if I’m gonna go through the trouble of using that I may as well maximize features. What is the latest word on more pulse ox readers working? And if not how good is sonar? I sleep with my girlfriend, 3 dogs and loud air conditioner unit is it accurate enough to just buy the app and make it work? P.s I dont cate for things on my wrist otherwise I would have bought a Samsung gear awhile ago

I hope so.
We are negotiating with Go2Sleep vendor team about it.

Today the Go2Sleep device arrived at my place. So far so good. I can connect it with SAA but no heart rate is detected so far. As I want to have a more accurate sleep tracking while using heart rate, I don’t want miss this feature. Up to know, I used a polar h7 sensor which is sometimes not too nice to wear during the night.

However, the Go2Sleep ring is much more comfortable and I guess the oximeter will work (will try it today in the night) but I want to have the heart rate too. Is it possible? Can I programm the api myself?

Using two devices is not possible or? If the Go2Sleep heart rate will not work, I am not sure if I will stick to the product.

So first feedback. The night is over. Either heart rate nor oxygen was measured during the night in sleep as android using Go2Sleep…

However, just saw that there is an app already

. However, the usage of the app is not well described yet. Just start it and then run SAA in addition? Do we have to select a heart rate sensor and add oxygen measurement too?

Hi. Thank you for reporting.
I added SAA screenshots in Go2Sleep description in Google Play Store for you can check how SAA should be configured to use Go2Sleep. 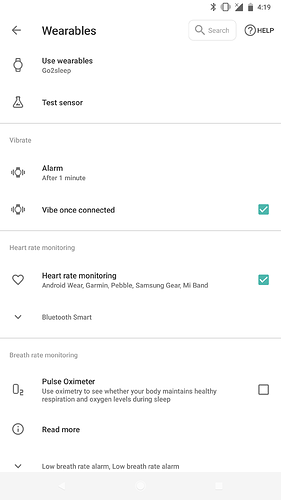 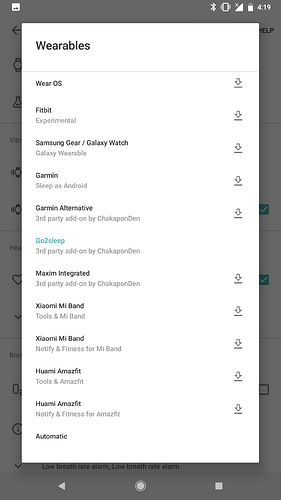 Thank you. The problem was the missing selection in the wearable. As you suggested, I had to install the beta version of SAA.

I hope you can add the movement data in addition and that the sonar deactivation will be removed while using a wearable.

just want to give some feedback. The go2Sleep device is really a nice one but I guess I will sent it back based on either of these two things:

a) goSleep (the vendor of the device) don’t want to support sleep as android and hence, Den cannot go on in integrating the movement data which would make the device really handsome - but its sad …
b) After activating a wearable, the sonar or accelerator of the smartphone is deactivated. Hence, SAA cannot distinguish between different sleep phases. The smart clock is not working as no sleep phase can be calculated

Summary, even though the device is nice, everybody is brewing own beer. Sad. Other oximeters don’t touch my interest. So I probably stick with my Polar H7 and don’t think about oximeter tracking anymore.

Hi Den
Just received my go2sleep. I also use the sleep phaser smart light, which helps SAA track movement. When the sleep phaser is enabled in SAA, go2sleep data doesn’t get captured. Disconnecting Sleep Phaser enables the go2sleep data. Is this a fixable bug or as mentioned previously, does go2sleep disable other movement tracking? Can the go2sleep add-on just capture heart rate and spo2, without impacting on other tracking methods?

Further to this, how does go2sleep provide hr and spo2 data? Is it a simple Bluetooth LE stream or is it somehow more complicated? If it can be streamed via BLE (as the Stresslocator product does), perhaps SAA can capture it natively via the Bluetooth smart function? Any thoughts on this?

Hi, this is SAA limitations as I understand. Go2Sleep use simple BLE protocol for HR and SpO2.
If SAA developers implement sleep tracking information (HR, acceleration, SpO2 etc) aggregation, you will use sleep phaser + go2Sleep + xiaomi mi band + whatever devices to collect the most accurate and complete information about your sleep.
I understand that this requires some work from SAA developers, but I hope SAA team will present this feature or at least comment on this.

it is exactly as Den says… many thanks… at the moment we only support multiple devices if the HR device uses the standard BTLE HR service, we have the feature to support multiple devices for sleep tracking on the todo list, but it is a big rewrite in SAA, setup is quite demanding in user end so we are still consider if and how to best approach this…

Totally understand and thanks Petr for the reply as well. When I connect to a few other BLE HR devices using nRF connect, I can see the HR service. But I don’t see this with go2sleep. Is there a document on how go2sleep publishes HR and spo2 values? It’s a shame we can’t convert BLE data on the fly and still make it look like BLE data to other apps.

Thanks Petr for the feedback! Is it possible for SAA to provide a special hook/API for HR and Spo2 data only? So if anyone wants to publish HR/SPO2 data, SAA could use it much like it does with Bluetooth smart (but outside of the more complex smartwatch integration feature)? I guess this is the type of thing you are considering?

Hi guys… So what is the recommended setup at the moment if we want to use SaA for tracking all three key metrics (heart rate SpO2 and motion)? Can the Stess Locator from Happy Electronics be used for SpO2 and heart rate simultaneously with Sleep Phaser for measuring motion?

All I would like is the SpO² and nothing else. I have a really good armband HR monitor w/HRV and a variety of other features. One of them not being SpO². It would be good if the main app allowed you to choose which metric is to be used by which device. A finger-only device sounds excellent for oxygen saturation. (Especially when people are a bit jittery about their oxygen due to a nasty little bug . . .) I generally am 95< and am curious how I do during sleep. I wonder if any of these devices work for fitness activities during the day? That would be a helpful guide to tell you if you’re doing enough but not too much. I am intrigued by your ring. Thank you for your work!

P.S. – I wouldn’t wish it to vibrate as I am sleeping very lightly recently. I’m basically stressed and am grateful for any sleep I can get. I turned off all vibrations emanating from my watch(es), which then allowed me to be pleasantly awakened by just room light (Hue) and really wonderful Alpha Waves sound. So vibration in mid-sleep would not be good. I have sometimes 15 awakenings in a single sleep session.

It’s always better when you can control the device fully.

The Ticwatch Pro 3 was just released, it has an O2 sensor - will there be support for that sensor?