Thanks for reading, I hope this can get fixed soon. I go running after work and like this I won’t have enough charge left to track workouts without charging the watch first.

Hi @Mathias_Appel, we’re slowly learning that on the Galaxy wearable platform it may not be possible to have both accurate data and battery efficiency. We need sub-second accuracy on the sleep tracking data, which at this moment means getting data from the sensor every 500 ms.

Last year, the app has been suspended from the Galaxy store for battery inefficiency, because we were keeping the watch awake all night to be able to poll the sensor every 100 ms (which is ideal).
We then had to rewrite the app so it used sensor batching (a technique which allows the watch CPU to sleep while the sensor gathers data into it’s own internal memory and then passes it as a batch to the CPU every few seconds).
Efficiency of sensor batching heavily depends on the size of the sensor’s internal memory. We had no way to find the size beforehand for each watch model, so we wrote it in a way that the app may combine sensor batching and keeping the CPU awake if the sensor memory size is not enough for sleep tracking purposes.
Well, guess what - it’s really not enough on any Samsung watch. The internal sensor memory has only space for 300 values, which means that with using sensor batching exclusively, we can only get 2-second accuracy (mainly because we can only wake up the CPU and process the sensor data only every 10 minutes - that’s a hard restriction on the platform). We actually used the 2-second accuracy for a while, and that was battery efficient, but the data were distorted towards higher deep sleep. That’s the 10% battery drain you were seeing.
Is it correct that also the deep sleep percentage is lower for you with the new update?

So with Samsung, it’s a tradeoff between battery efficiency and accuracy, and it doesn’t really seem to be moving away

We can lower the accuracy a little within some sensible boundaries - maybe up to a second, which would halven the battery drain, but there’s not much space after that.

I see, that does make it difficult.
Deep sleep percentage has been slightly lower.

Is it possible to give us the option to choose between accuracy and battery life? For example, I mainly use the app for the smart wake up feature and for that the accuracy was good enough.

Hello, one of our users reported significantly lesser battery drain (about 25% per 6 hours), and he provided me these steps he follows…

I agree with going with better battery life. Loosing so much battery is really rough.

Similar situation with the gear sport which makes the app basically unusable. I’ll go to bed with approx 75% battery and 8 hours later the battery is completely dead. So no tracking and no alarm. I had this for the last coupleof weeks. prior to that it worked fine. Pleaseadvise

I would like to see an option between accuracy and battery life if possible.
I use it the same as Mathias and would prefer to be able to use the smart wakeup with better battery and less accuarcy please.

I have a Samsung Gear Frontier S3, and I too have terrible ~75% battery drain since the update. I don’t care about data accuracy when my watch is dying while I sleep. I need the silent alarm. Is it possible to revert to a previous version? Seems like the temporary solution of not tracking it with your phone would eliminate the alarm function too.

I am using Samsung Galaxy Watch3.
I get around 55% battery drain per night as well. But I have also noticed improved sleeping tracking.

I prefer getting more accurate results.

I think the solution to this could letting people to choose the accuracy of the the tracking or letting the tracking to be turned off.

Thank you for your support!

I am here with this. The alarm and captcha are huge to me. Doesn’t help though if my battery tanks overnight.

You guys are the best! Thanks!

Excellent. What a difference it has made.

What update would that be? When chatting with Samsung, they have assured me that I have all the latest updates but I’m only getting 7-8 hours off of a full charge on my Active 2. This just started about a week ago. If I look at the app usage of the battery, I don’t see any large drains. I normally get a day and a half and that is with heavy usage at the gym daily. Now I’m only getting 7 hours before the watch is literally dead.

Wait you are using the galaxy watch 3? It has not been working for me ever since I got that watch, so I had to revert to the active 2 for sleep tracking.
I even reported this issue in the bug section but to no avail.
Would you mind sharing a screenshots of one of the tracked nights with the watch 3? 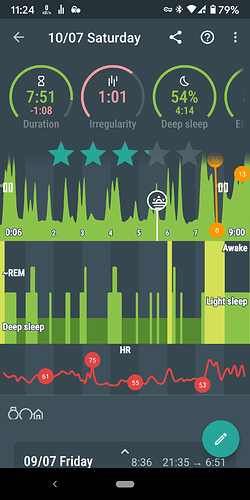