Detailed description of the problem:
Sometimes it works and records sleep data perfectly, other times it just doesn’t, its random.
I am using a Tickwatch E with Wear OS, everything connected, updated to the latest version.
Using Android 8.1.0

And then i wake up in the morning to find out either a fully recorded night with the corresponding graphic, or a completely blank empty graphic with no single record.

So basically it randomly just doesn’t record at all, even though it says it is connected and the “Check” flashes. Worst of all it doesn’t do anything different when it doesn’t record, the steps are all exactly the same, and nothing changes or even gives any sign that something is not right.

Same here!
Since I started to use Xiaomi Mi band 4, sleep started to registry no data some nights. I use the Mi band 4 and sonar sensor to sleep tracking.
Sleep version: 20191101.

I just got an almost complete red-line. I have a Pebble, and I let it track sleep. After showing no graph, it finally kicked in, and Pebble Health shows a complete (overly aggressive and not accurate, as per usual) graph.

The weird thing is that I HAD A GRAPH WHEN THE ALARM WOKE ME! I ticked off some tags, hit “done,” and the SaA graph did not return when I did. I don’t know what went wrong. Filed several bug reports as I struggled to investigate it, and lo and behold, the Pebble Graph kicked in! But the SaA graph remains redlined.

As I said, I sent several bug reports. The logs look odd. I see a word in the log that says “BROKEN END”. I can’t code in Java, so I don’t know what this means, but it certainly describes what happened. I had a “broken end.”

I will also show you the test graph.

So, I leave it to you guys. 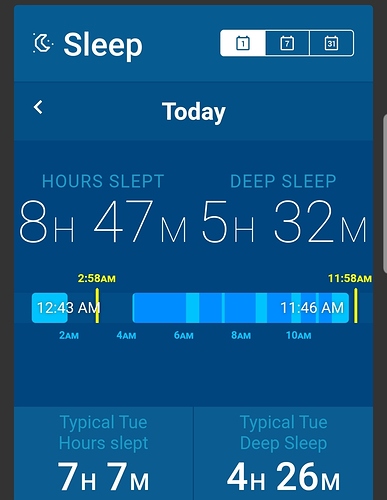 Today, a night later, it went back to normal and recorded just fine. I don’t understand what happened the previous night.